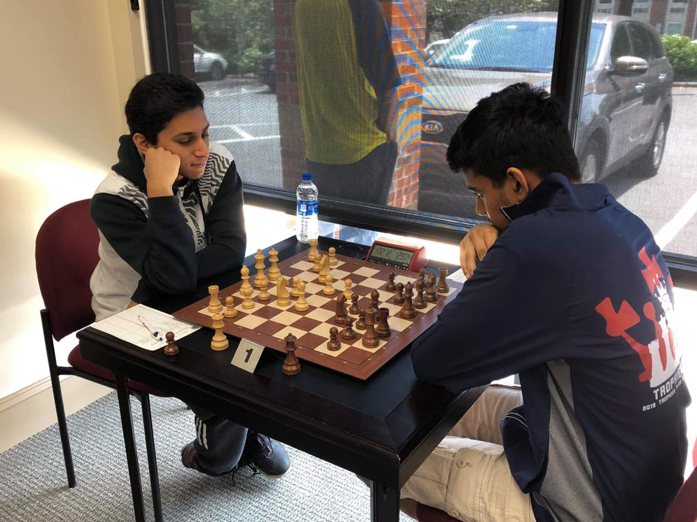 I was looking forward to the 2019 North American Junior (U20) Championship, a prestigious event within the North American continent. Kudos to the Charlotte Chess Center for their amazing efforts in organizing these kinds of tournaments. Prior to this, I happened to have played a few norm tournaments at the Charlotte Chess Center and was just there in the first week of June. Unfortunately, my subpar performance was not sufficient to earn the norm, so I was hoping to make amends and turn in a better performance at this event, which I was competing for the first time and the top 3 finishers would achieve at least an IM norm.

Due to the possibility of achieving norms and the highly coveted IM title, this tournament turned out to have a tough field of players which included 3 IMs and several master players. Being a 10th seed in the starting lineup, I got paired against James Dill, FIDE rated around 1900, in the first round and I was hoping for an easy win and a good start. Well, not really! I began to outplay him, but after positioning my pieces on their best squares, I was unable to find the breakthrough. With a solid position out of the Sicilian Classical opening, I became a bit reckless trying to execute a win, and he exploited my inaccuracies well enough to eventually draw the game.

This was an upset start and spoiled my plan of winning my early rounds. I knew it was not over until it’s over and since I came down lower in the wallchart, it brought down the rating average of my next few opponents. But there was nothing I could do, and I just focused on playing a good strong game to eventually come back with my eye on the top norm and title awards. After my next two wins, I encountered top seed IM Advait Patel in the 4th round, who I had played multiple times in the past ending in draws, and this was no different.

I was still in the race and managed to win the next two games. Being up a pawn in round 5 against FM Justin Chen, I played atrociously in the middlegame and got a very unpleasant position. Despite how gloomy things were looking, I wasn’t going down so easily as we were both running low on time. I managed to salvage something in my favor and gain the upper hand to win the game. I was then paired with another top seed IM Praveen Balakrishnan (a friend from VA), which turned out to be an uneventful draw. After this result, it became intense for norm and title seekers and I was to face a strong Canadian FM Nicholas Vettese in the 8th round. This was another Sicilian game that was quite interesting.

After the 8th round win, I had already secured the IM norm in the bag and both Praveen and I tied for first with 6.5 out of 8. I had mixed feelings as I was in contention for the IM title. The scenario became a little complicated and dependent on Praveen and I. If both of us ended in a draw or win in the last game, it would guarantee an IM title for me, and GM norm for Praveen. Any other result for one of us would affect the other.

Saturday night was a bit stressful for obvious reasons, and I was going to play white against IM Craig Hilby. The last round was scheduled to be in the morning of the final day, Sunday. Fortunately, I was able to get some rest and prepare myself for a decisive game. Out of the middlegame, I gained a slight positional advantage and was in flux of trying things out to bring the game towards my side, but I knew this would not be easy. Craig eventually offered me a draw and I looked at Praveen’s game which seemed to be an absolute draw. I decided not to take any risk and accept the draw. I’d earned the IM title!

Overall, it was a great and thrilling tournament, which I thoroughly enjoyed. Earning the IM title gives a proud feeling but it definitely was not an easy ride for me. I could still remember when my dad showed me the basics of chess in early 2010 and I happened to join the elementary school chess club, and gained encouragement from local Chess Coach Omar Pancoast III when I started my journey into the competitive playing world. Thanks to the Maryland Chess Association (MCA) for organizing several scholastic and open tournaments, which boosted my performances and made me confident in winning many state and other open championships. During my journey to the IM title at various levels of my game, I got an opportunity to work with coaches including Jagan Mohan from MyChessGuru, GM Ramesh R.B., IM Oladapo Adu and very recently, GM Boris Avrukh (current), who all provided me useful resources and helped me prepare myself for the tournaments.

The mental sport of Chess has helped me surmount challenges and develop in a myriad of other ways. As my chess game has strongly improved, I have developed better concentration and motivation in my academics. The game has also taught me to be open-minded and creative in the face of new situations and it made me into a much more confident and logical person. I could not imagine a better way to start my college life in August at the University of Maryland, leaving out one of my milestones behind, and hope to shortly earn GM norms!